With the NFL season now done and dusted until September, American sports fans will be focusing on the NBA, NHL and MLB throughout the spring. But there is life to sport outside of the United States. In fact, some of the biggest and most prestigious events will take place in Europe this year and none come bigger than the FIFA World Cup.
All eyes will be on Russia this summer but there are various other competitions and major tournaments that deserve our attention. In this article, we profile a few of those events – you won’t want to miss out on any of them…

Regarded as the highlight of the National Hunt season in Great Britain and Ireland, the 2018 Cheltenham Festival is one of the most anticipated events of the year for racing fans. With four full days of exhilarating action, viewers will see the best horses, jockeys and trainers do battle for the chance to claim a coveted Festival victory.
You can keep up with the latest news and market movers from tips at Timeform – it is sure to be another exciting week of racing action at Prestbury Park. The Gold Cup is the highlight of the week, with a record £625,000 prize fund up for grabs in 2018.

All eyes will be on Cardiff’s Principality Stadium for this clash of the titans. Anthony Joshua, Britain’s white knight of heavyweight boxing, will take on New Zealand’s Joseph Parker in a huge unification fight. This is an iconic occasion as it marks the first time that two reigning heavyweight world champions have fought on British soil

Whether you’re backing Joshua or Parker, one thing is for sure: this looks set to be one of the bouts of 2018. Somebody’s unbeaten record has got to go and with WBC champion Deontay Wilder waiting to fight the winner, American boxing fans will be keen to tune in.

Arguably the most celebrated race on the Formula One calendar, Monte Carlo will host the Monaco Grand Prix at the end of May and motorsports fans will already have this one jotted down on the calendar. 2017 winner Sebastian Vettel could be the man to beat, he already has two Monaco Grand Prix wins to his name.
Be prepared to see some of the richest businessmen and celebrities in attendance, Monaco always seems to attract an affluent audience. A trip down to Monte Carlo will cost you an arm and a leg – perhaps sitting down in the front of the television is a better idea…

Russia will host this summer’s competition and fans will be expecting big things from the likes of Brazil, Germany and Argentina. Lifting the Jules Rimet Trophy is the main aim for soccer’s most successful nations and it would take a brave man to back against these three teams on current form. Germany and Argentina went toe-to-toe in the 2014 showpiece… 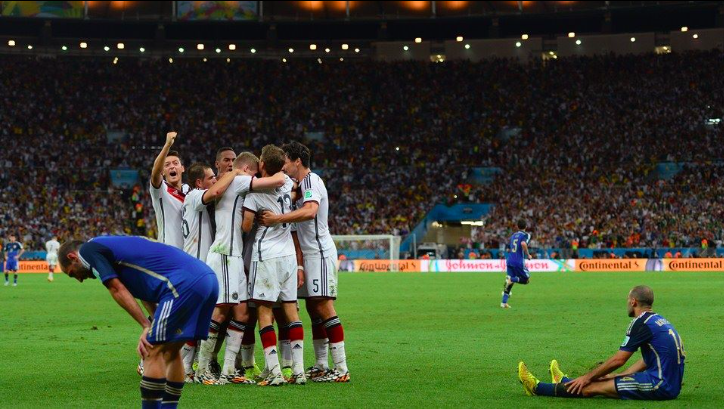 Source: FIFA World Cup via Facebook
Sadly, the United States failed to qualify for the tournament this time around but plenty of soccer fans will be tuning in. The World Cup final is usually one of the most watched sport events and millions across the world will have a keen interest in the competition.

One of sport’s most demanding competitions, the Tour de France is a true test of attrition and determination. Physical and unforgiving, even the strongest cyclist will struggle to cope with the added mental demands of this event. Four-time winner Chris Froome will fancy his chances of notching another Yellow Jersey this summer.
With 21 stages, it may be tough for American sports lovers to keep up with every race. It is a very easy watch though and you will feel exhausted just watching these cycling superstars compete across 2,200 miles of French land. For both viewers and competitors, this requires the utmost commitment and passion.

Last but not least, we have the Ryder Cup. One of golf’s most eagerly anticipated events, the United States team will take on Team Europe in Paris – this year’s competition will be held in Paris. Historically, Team USA have been very successful but the Europeans have won six of the last eight editions of this famous tournament.

Over the course of the 2018 golf season, the best players in the business will try to impress the two captains ahead of selection. 2003 US Open champion Jim Furyk will lead the United States this year and defending the Ryder Cup has to be his number one objective.