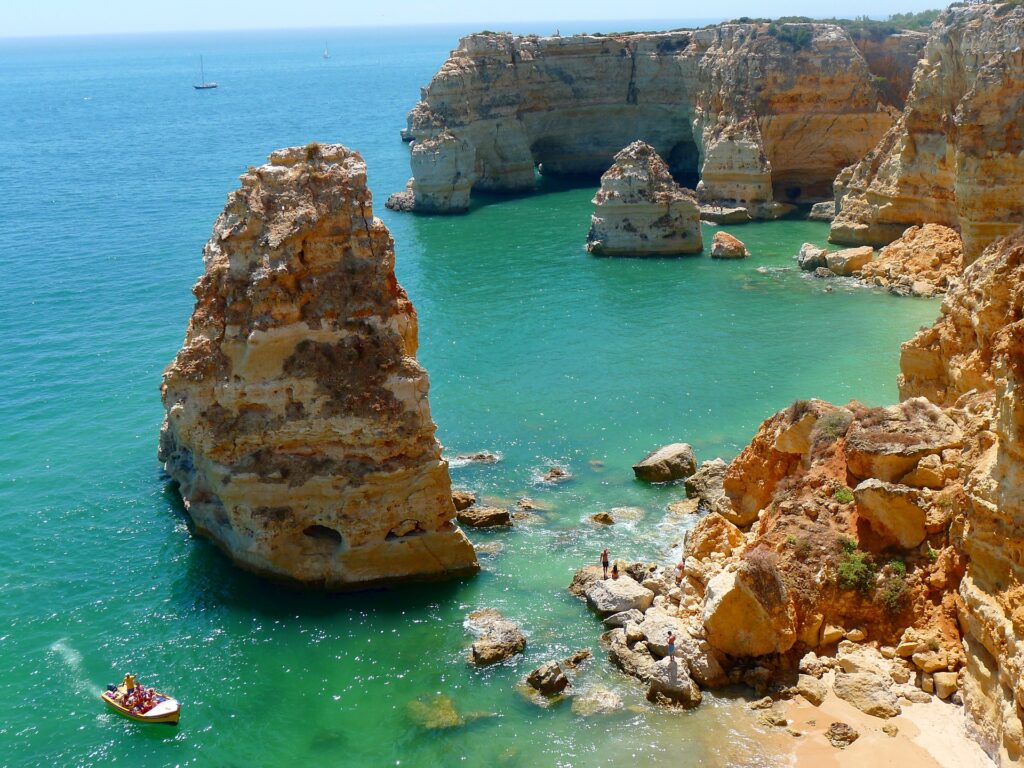 The Isle of Wight is a truly amazing place that will be a great option for a romantic getaway with a loved one. On the island, there are attractions suited to every fancy: Saxon churches, Norman castles, and even ancient medieval estates in the style of the Victorian era. However, not only historical sites and architectural monuments are worthy of your attention but also the very nature of the island. The Isle of Wight is rightly called the “Territory of Outstanding Natural Beauty” – the island received such a status due to the presence of special scenic countrysides that take one’s breath away. And so, let’s consider the best places on the Isle of Wight to discover with your loved one.

The Chink on the Isle of Wight is a picturesque canyon between the villages of Bonchurch and Luccombe. It stretches from the eastern foot of the hill of St. Bonifatius to a place called Bonchurch Landslips.

The name of this attraction perfectly describes the extremely narrow split that divided the rock into two parts millions of years ago. As far back as the last century,

rough steps were intagliated in the Chink, and later, metal handrails appeared. Although the descent in the tight space between the rocks may seem somewhat extreme, it is absolutely safe. In addition, the torn surfaces of the rocks, the roots of trees picturesquely grown into stones, colorful mosses, and the rustling of ash foliage above your head will make you walk slowly, enjoying every moment of close unity with pristine nature.

The Isle of Wight Steam Railway

Another popular attraction of the Isle of Wight is the operating steam railway. It is considered the oldest railway in England (it was built in 1875) and still operates exclusively for tourist purposes. Its route runs 5.5 miles (8.9 km) along the territory of unspoiled nature and includes 3 stations – Smallbrook Junction (the beginning of the route), Havenstreet station, and the terminal station called Wootton.

Shanklin Chine is a landscape park located in the city of Shanklin. It is a coastal clove with waterfalls and lush vegetation which is riddled with walking paths. Shanklin Chine is one of the earliest tourist attractions on the Isle of Wight – its first visits date back to 1817. The beauty of the local species inspired an English poet John Keats and also was described in the works of artists Thomas Rowlandson and Samuel Howitt.

Shanklin Chine covers an area of about 1.2 hectares, while its length is more than 400 meters, and the difference in elevation is 32 meters. Near the park, there are different cafes, cozy restaurants, several hotels, and the local beach.

This is one of the most popular and visited attractions of the Isle of Wight. Osbourne House is an Italian-style palace erected by Queen Victoria and her husband Albert in 1845-1851 as a summer residence in the town of East Cowes on the north coast of the Isle of Wight.

The Osbourne House was built by Thomas Cubitt, who carried out the reconstruction of Buckingham Palace. In the house, the Queen’s grandchildren were brought up, as well as the last Russian Empress Alexandra Fedorovna.

In 1901, Queen Victoria passed away, and her private apartments were turned into a family museum. In the 1990s, the house was transferred to the custody of the English Heritage organization, and now it is open to visitors from spring to autumn. To get more information about the Osbourne House.

Whitecliff Bay is located in the east of the Isle of Wight, dead south of the Bembridge village. It is a popular tourist attraction, mainly due to one of the best beaches on the island.

The view of the coastal part of the Whitecliff Bay is typical of the Isle of Wight – it is surrounded by chalk buildups with stiff slopes that form the borders of the bay. The beach is sandy and pebble, spacious (about 200 meters in length), and almost always deserted. Most of the vacationers stay at the camping site, which is located several tens of meters from the beach. Also, on the beach, there are 2 cafes where you can arrange a romantic candlelight dinner with your loved one.

This is a unique natural attraction – chalk cliffs in Alum Bay. The Needles are three multi-colored cuspate cliffs approximately 30 meters high. At the end of this cliff line, there is a small lighthouse built in 1859. Previously, this bay was an important strategic goal, but now the cliffs and the lighthouse have become the hallmarks of the Isle of Wight.

At the top of the cliffs, there is the Needles Pleasure Park. Its visitors can enjoy an amusement park and an aerial ropeway from the Park to Alum Bay, as well as visit a patisserie, glassmaker workshops, and souvenir shops.

Also, boat rides are very popular among tourists. Leisure boats embark from the pier of Alum Bay every day from early April to late October. Therefore, you can

arrange a wonderful romantic date and observe spectacular views together with a loved one. This is one of the best things to do on the Isle of Wight.

Fort Victoria was built in the 1850s and used for military purposes. Nowadays, Fort Victoria is a country park, where there is a lot of entertainment and amenities for tourists. Moreover, you will have an opportunity to enjoy beautiful beaches, cliffs, and breathtaking landscapes with your beloved. Fort Victoria is rightfully considered the largest and most popular country park on the entire Isle of Wight. There are several spots that always attract the attention of tourists – a marine aquarium, a planetarium, a cozy cafe, and the Underwater Archeology Center. Also, you can enjoy superb views of Hurst Castle.

All Saints’ Church in Ryde is another popular traveler attraction on the Isle of Wight. The church was built in 1872 in the Neo-Gothic style and designed by the famous architect George Scott. Its dominant feature is a beautiful high tower, the sharp spire of which can be seen not only from different places of the island but even from the mainland. Large lancet windows decorated with beautiful geometric patterns are located along the entire perimeter of the church. Triangular pediments are inwrought with relief elements and crowned with crosses.

The magnificent decoration of the All Saints’ church is striking in its beauty. The wide nave contains massive columns with pilasters that sustain high arched vaults, decorated with pargeting. The interior of the All Saints’ Church involves original furniture, ancient paintings, marble statues, and beautiful stained glass compositions with biblical scenes.

So, when you get a craving for learning something new and unknown, discovering places of historical interest, and enjoying the real beauty of nature, be sure to take your loved one and visit the Isle of Wight – a heavenly place with a rich history, interesting traditions, and breathtaking landscapes! Article is provided by godatenow site, view homepage.