Southern California has some fantastic beaches compared to those of the French Riviera! Orange County squeezed in between Los Angeles and San Diego is blessed with its laid-back lifestyle, warm climate and 42 miles of Sandy coastline! So let’s take a look at the best of Orange County Beach Towns. 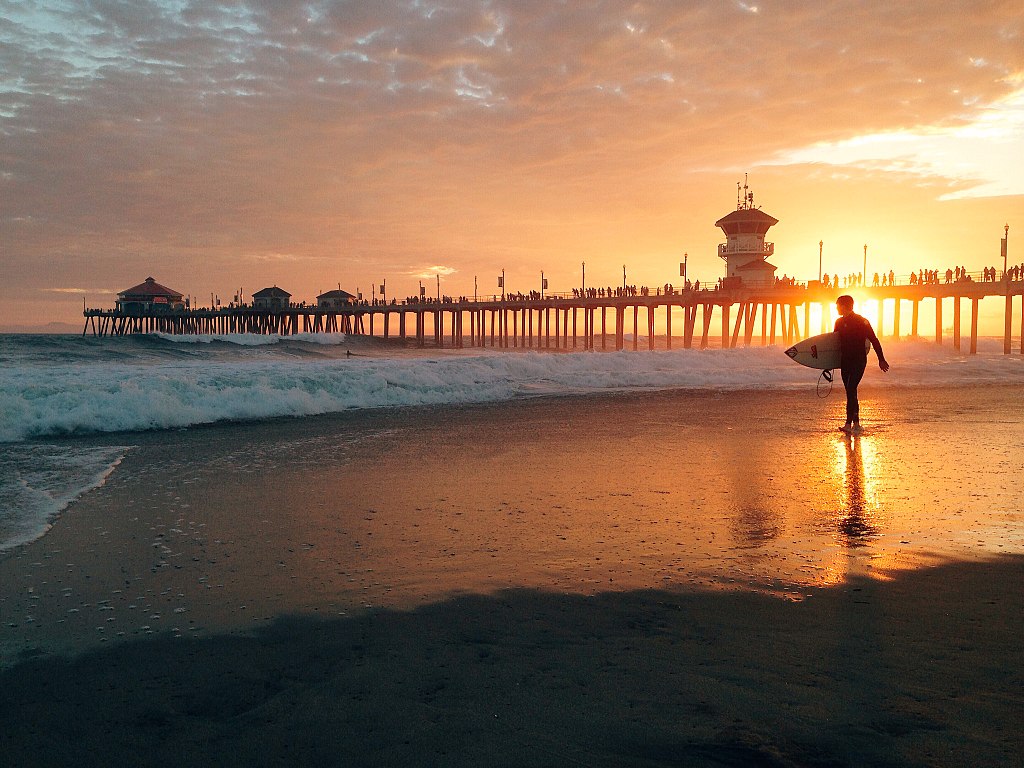 The longest Pier in California Huntington Beach Pier and one of the longest piers along the west coast of the country, makes one of the top photo spots in Orange County. One of Orange Countries liveliest beaches. It is home to plenty of bars, restaurants and cafes. It is also a good place to shop.

But it is the 8 miles long sandy beaches that attracts visitors to its sure to lay back, relax and tan in the Californian Sun.

In the town of Dana Point on the Pacific Way Highway is Salt Creek Beach.

A clean and calm beach some of the best waves in Orange County, Surfing along with Boogie Boarding are the activities of choice in Salt Creek Beach.

The beautiful grey beach has tide pools to explore and soft sands for romantic long walks.

Salt Creek makes a great family beach. A nice spot for a picnic or a barbeque on the beach. On top of this it’s easy to access and there a plenty of lifeguards around, there is even a few basketball courts to keep them occupied!

South of LA county is the San Gabriel River. Just south of this is Seal Beach in Orange County at the northern tip of the state. The long white and sandy stretch of beach its picture postcard perfect with a nice peer jotting out to the water and the backdrop of mountains in the distance. Seal Beach is a seaside town is home to 25,000 residents and is a popular beach town that brings in over a million tourists each year to its sures.

Seal beach has a 965 acre Wildlife refuge with plenty of native animals and marine life at Seal Beach includes the likes of Dolphins but surprisingly no seals.

Regarded as on many of the countries ‘best beach towns’ Newport Beach is a popular seaside town in Orange County.

Corona Del Mar State Beach and Crystal Cove state park offer beautiful beaches making the the star attractions. Corona del mar features a 2 k, long stretch of white sandy beach with tall cliffs set behind it and is a popular place for for swimming and diving. Crystal Cove meanwhile is even bigger with the beach over 3 kilometre’s in length and the wonderful countryside behind it. It is also home to a historic sight of beautiful coastal architecture dating as far back as the 1930’s. Newport beaches are popular surfing destinations while the harbour is the spot for those who interested in Kayaking, Rowing and Sailing.

Newport Beach has lots of festivities throughout the year the Newport Beach Jazz festival as well as the Newport Beach Film festival. While the town has a history and interesting old sites it is also pretty modern and hip the Corona Del Mar District is particularly popular with those interested in fashion and hosts many high end stores.

Newport Beach is also home to the fantastic fashion island stores which included prestigious boutiques with panoramic views over the sea. Fashion and Cosmetic tourism plays an important role in Newport with tailored made clothing to breast augmentation OC, Newport is known for setting trends.