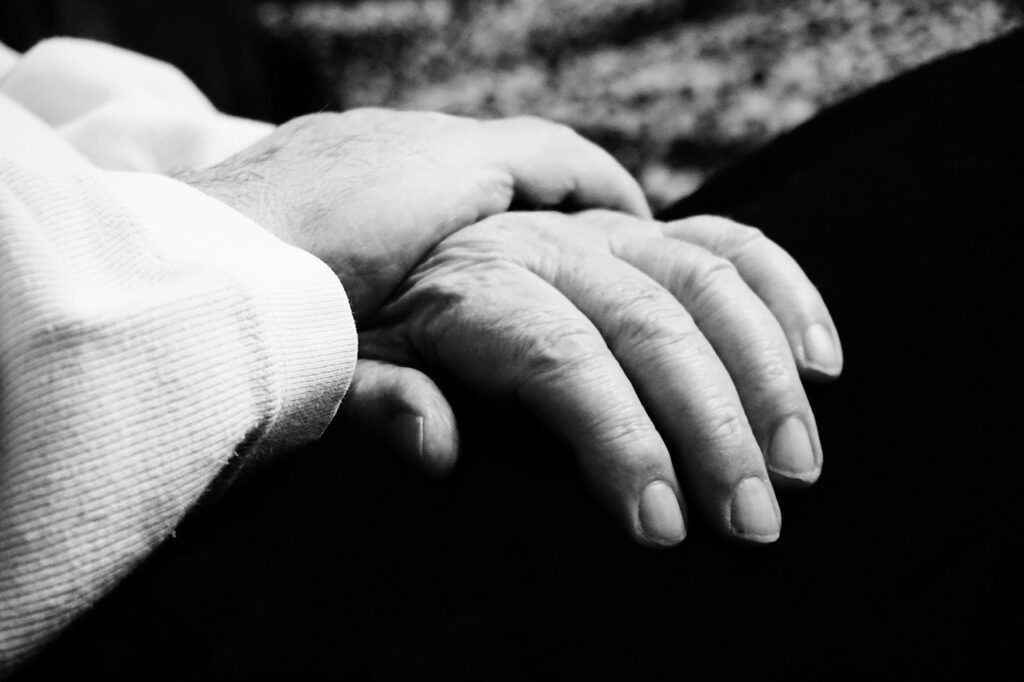 When a loved one is seriously ill, it causes a ripple effect across the family unit. The patient’s finances, interpersonal relationships, social interaction, education, and work-life are all affected. In turn, this impacts those closest to them. The exact influence of each of these aspects of life differs from person to person. Still, they all add up to different versions of the same thing, a negative impact on overall psychological well being.

But this is something that shouldn’t be ignored. At all life stages, the better your state of mind, the better your physical health. That’s true of everyone in the family, including the person with an end-stage illness. If they’re happier and more at peace, they’re likely to be in less discomfort and pain. In turn, that will make them feel more positive and comfortable – and so the cycle continues.

A New Model of Grief

As devastating as a terminal illness is, it doesn’t have to destroy a family.

Psychological growth and stronger relationships are possible as families process the situation and work together to move forward. Central to this idea is a new model of the stages of grief.

Rather than Elizabeth Kubler-Ross’s structure, which dates back to 1969 and involves denial, anger, bargaining, depression, and acceptance, Doctors Barbara Okun and Joseph Nowinski propose a model that moves through the crisis stages, unity, upheaval, resolution, and renewal.

Okun and Nowinski theorize that the big shift in the way we grieve is all down to the timeline of death in the modern age.

When Kubler-Ross and her contemporaries were practicing, death came a lot more swiftly than it does in many cases today. More people died of accidents than cancer, and even when they were diagnosed with a terminal illness, they had weeks or sometimes a few months to get their affairs in order and say goodbye.

Treatment has come a long way since then, people know more about cancer and have seen several myths debunked. Today, many people also live with bad heart conditions and other health complaints for years before they pass away.

In short, it’s a much longer trip from hearing about the diagnosis to moving on than it used to be. Okun and Nowinski contend that it’s less of a trip from anger to acceptance, and more of a journey from crisis to renewal. Families are no longer moving on after someone has died; they’re rearranging themselves while living with the uncertainty of someone who is dying.

Nowinski and Okun’s Stages of Grief

According to these pioneering psychological professionals, the five stages of modern grieving can be summed up as follows:

In this first stage, the terminal prognosis is explained, and the family is left feeling shocked and devastated. Anxiety, anger, and guilt are the primary characteristics of this phase, and if relations between relatives were already strained, they tend to get worse now.

One of the most helpful things to do during this stage is to designate a specific family member to accompany the sick person to their doctor’s appointments. They’ll be able to retain extra information, and it’s easier for the clinician if they’re liaising with just one additional person. Assigning this role now also does away with the rivalries that could rear up later on.

During the Unity phase, families tend to rally around each other and come together. Everyone is actively participating in the team effort of making their loved one well again. There’s a very industrious feeling, and for the most part, everyone gets along. This is also when individuals try to resolve any issues they have with the person who is dying.

This third stage is when the almost unbearable uncertainty of living with a terminal illness rears its ugly head. The Unity from the second stage often disappears now, and this is when family members start to experience those long-term work, social and other effects mentioned earlier.

Many will wonder when or if this awful period will ever end, and they’ll struggle to adapt to their lifestyle changes. Resentment is the defining emotion of this phase, and there’s often also a good amount of fear.

There’s more of an acceptance of the new reality, and when you’re in this stage, you’re likely to spend a lot of time reminiscing. These memories can make this a happy or unhappy time.

This is also when resolutions are reached about important end-of-life decisions. The dying person needs to stipulate their Do-Not-Resuscitate wishes, finalize their last will and testament, give instructions for their funeral and memorial service, and organize their senior final expense program.

Renewal usually starts after the terminal family member has died and is characterized by an affirmation for the good parts of life and an understanding that there has to be sadness to have happiness.

You move on with your life, but your relationships with those still alive are stronger, and your outlook may have changed. It’s the stage where you embrace the hardships you have faced and revel in the good times behind you and those still to come.

Families might start in Crisis, enter Resolution, and then slip into Upheaval. Or, they might bounce between Unity and Upheaval for a while. The key is accepting that there will be friction and that it’s all part of the process – but you get to choose whether you get stuck in one phase or not.