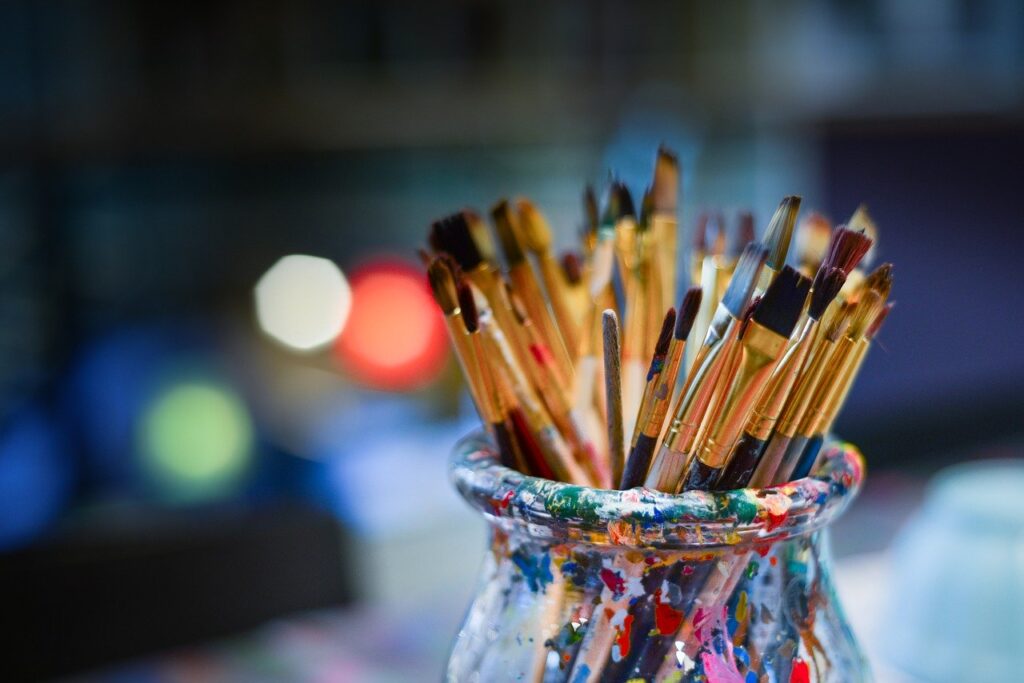 Romantic Art is often seen as only floral and pastoral landscapes along with luscious blue waterfalls, all glorifying the beauty of nature in its wilderness. But, it has more substance and is fully loaded with history, more than we realize.

Casper David Fredrich’s art is a classic example to understand the ocean-deep roots of the Romantic Movement. His work is drenched in not just stupendous play with colors but also powerful symbolism in contemporary scenarios.

This symbolism was in the form of religious undertones and man’s bond with nature which made him a trailblazing force and an extender of this movement. Let’s dive deep into his world of Romantic art and breathe in his creativity.

Monastery Graveyard in the Snow

A mere look at this visual is sure to send a chill down your spine- such is the impact of Casper. The desolate church enveloped by icy white snow is to fabricate a cold atmosphere amongst the audience. Moreover, the sole use of black and white colors depict a certain edge of grim that this painting beholds.

The peaceful environment of a monastery is starkly juxtaposed with the frightening aura of the oak trees that surround it as well as with the solemnity of the grave. Monastery Graveyard in the Snow brings forward the element of the presence of nature and the manmade structure co-existing.

This painting is reminiscent of the spoils of the Thirty-Years war and the Protestant upheaval. The percussion of this war was the annihilation of the peaceful countryside, amongst which this monastery was one. Its dilapidated condition is paralleled with the religiously-torn population through these religious wars. This German artist beautifully brought out a grim issue that took a huge toll on its people.

Don’t let the surreality of this landscape fool you as it has equal parts brain and beauty. While it is something aesthetically pleasing, it also gives you your daily food for thought, that was the beauty of Casper. Monk By The Sea, 1809 is seen as another one of Fredrich’s radical compositions that explores a lot of themes endorsed by modernists.

Cutting to the color play, you can see shades of blue that cover the top of the sky, the pink and orange tints giving us a hint of the impending sunset, the land, and the black waters. The colors look well-blended but yet stand out in the face of one another, each giving out different connotations.

As you gaze deeper into the soul of the painting, you’ll discover a man standing at the bridge of the land, ogling into the nothingness around him. The puny size of the man is juxtaposed with the grandiose of the powerful sea that stares back at him. Nature is depicted as superior wherein man is powerless when comes face-to-face with it, presenting it as both a preserver as well as a destroyer.

The Wanderer Above The Mist

Fredrich’s landscapes have always lent his landscapes an ambiance of mysticism and meaning beyond imagination. At just first glance, it grasps the attention of the onlooker, intrigued to know what the figure in the painting might be wondering about. The Wanderer Above The Mist displaying remarkable pictorial water is an exemplary representation of Romanticism.

One man marveling at the creations of nature as he’s surrounded by the sharply elegant din of the rushing waves and as mist starts closing in on him. The solitary man in the lap of nature, introspecting in solitude which nature graciously offers him, is the classic Romantic man. It encourages one to explore the deep beyond one’s mind and spirit, detached from the urban notion of it.

This hauntingly and disturbingly breathtaking landscape is an homage to something not many are known of. Casper puts on a platter a graphic image which brings our attention to how he toyed with the element of light in the face of such wreckage. Moreover, the shades of blue are unevenly spread out through the masterpiece that stands out make it look all the more real.

The Sea Of Ice is a portrayal of a battered sheet of ice with bits of shipwrecks oozing out of it. This is a reminder to those who lost their lives in excursions and discovery voyages to the North Pole. This painting is a crystal clear ode to the martyrs who went there to explore but lay frozen in the water.

This German artist trickled artistic creativity which he stained the canvas gorgeously while also infusing his works with impeccable imagery and allegories. He featured the wanderers and lost seeking refuge in the nurturing arms of nature while also propagating the ruins of the religious wars that took place in Belgium. His works transcended the genre of landscapes in Romanticism to a profound height.